Land Rover in the beginning

The Land Rover was created in 1948 by Rover, the iconic British car company, and was designed very much as a utilitarian 4WD off-roader. 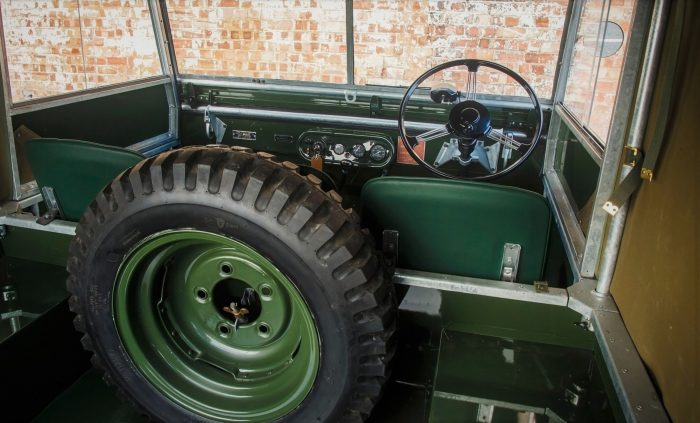 To those who can just about remember these early vehicles, the modern 21st century Land Rover is almost unrecognisable, sitting at the top end of the luxury 4X4 market.  Even though its ownership is no longer British and most of the manufacture takes place overseas, Land Rover still retains a cachet that is hard to beat.

The prototype featured a central driving position which didn’t last long for obvious reasons and the Series 1 was launched at the Amsterdam Motor Show in April 1948, retailing at the princely sum of £450.

The Land Rover quickly attracted the attention of the British Army and by 1949, production had topped 8,000 and the Army had placed its first order.  At this point in time, the Land Rover was designed to be a functional workhorse, worlds away from what it would later to turn into.

By the early 1950s, the freewheeling system was replaced by optional two or four-wheel drive and the engine capacity increased from 1595cc to 1997cc.  The patronage of the Royal family boosted Land Rover sales as a custom-built State Review Land Rover joined the royal fleet in 1953.  Land Rover had been granted a Royal Warrant in 1951 by King George VI and half a century later in 2001, Land Rover received a Queen’s Award for Enterprise, as recognition of the exceptional international reach of this vehicle.

In the 1950s, the country set began their love affair with Land Rover and this has continued for decades only diluting in recent times with the introduction of competitively priced trucks and pick-ups.

During the 1970s, the company decided to embrace the luxury car market and created the Range Rover also beloved of Royalty and regularly seen cruising around the Badminton Horse Trials.  This was joined by the Discovery in 1989 and then the Freelander in 1997, a smaller entry vehicle for those who wanted the badge and cachet but not necessarily the size and expense.  The Defender continued – the original beating heart of Land Rover if you will and still supported by a bunch of hardened enthusiasts – but was overtaken by its smarter siblings which were much more luxurious although still manufactured with the same and original box frame.

Fast forward to the 21st century and Land Rover is now owned by Jaguar Land Rover, a subsidiary of Tata since 2008.  Land Rovers are still made in the UK but are mostly manufactured in Brazil, China, Slovakia, and India. The original Defender is no longer in production with the last one rolling off the production line in 2015 and it has now become something of a collector’s item particularly amongst traditionalists, with good examples fetching big money.

2015 was known as ‘The Year of the Defender’ celebrated by a one-kilometre-wide sand drawing of the original Series shape on the beach at Red Wharf Bay in Anglesey.  A quick search on Google for the term ‘sell my Land Rover’ will reveal hoards of keen collectors, admittedly some are looking for parts but a mint Defender can make serious money. 2020 saw the launch of the New Defender, a very special milestone in the history of the vehicle.

Before contacting us why not see what our customers have to say about us, read our 5-star reviews.